This article is best viewed from internet provider such as Google Chrome.

It’s the tenth anniversary of AAT Annual Conferences, and there can be no doubt that this year’s event was right up there with the biggest and best yet.

And in an increasingly digital age, our member delegates didn’t hesitate to share their experiences of the conference on various forms of social media, using the dedicated hashtag #AATConference.

Here’s just a taste of how social viewed the celebrations as the AAT Annual Conference moved into its second decade.

Ahead of the Conference, speakers Emma Rose and Andi Lonnen shared member suggestions around the myths of accounting while delegates – some 300 of them – were busy buying tickets, and finding out whether they’d made the shortlist for the Professional Member Awards.

This year at the @YourAAT #aatconference, in June, as well as hosting my usual Q & A session, I will be hosting a walk around the grounds, with delegates at 08:00. Who will join me, for a chat and to walk off their breakfast?

Right around the corner

As the Conference day dawned, our sponsors, speakers and suppliers were keen to let you know exactly where you’d be able to find them!

I will be attending the #AATconference this Thursday and Friday. Please pop by stand 13 to find out more about @Xero's Partner Programme and to see our amazing product in action #beautiful @YourAAT

Enroute to @YourAAT #AATconference. 2 days of CPD and seminars. Is it normal to be so excited about tax? ?? #CPD #trainingdays #conference

Morning, we are all set and ready to go! ? Come and meet our #AAT course advisors to talk about #AAT training for you and your team! ?‍♀️?‍♂️ We have plenty of bags, sweets and many more goodies for everyone. @youraat #aatconference . . . . . #aatconference #aat #accountinglife #icslearn #aatconference #icsrealstories #onlinelearning #edtech #education#studying #learn #learning #motivation#careers #productivity #flexiblelearning #BehindTheScenes #Learning

We're looking forward to a HUGE #AATConference ??? visit in the Beaumont suite! pic.twitter.com/napNtj0QfW

The 2018 AAT Annual Conference started with members from across the UK descend upon the stunning De Vere Beaumont Estate in Windsor on Thursday 7 June.

And many of you were keen to make your presence felt, as the Conference opened with a Sue Tonks networking session, opening address from AAT President Nicky Fisher, and keynote speech from HMRC’s Penny Cieniwicz.

Great morning so far, so much learnt, can't wait to pass this on #AATConference #focusbusinessclub #learning

Nice to see so many engaged members at the #AATconference this year. A great bunch pic.twitter.com/6rZ2JfDtUq

#AATConference after a yummy lunch another workshop
MTD session #aatawards

Off to learn all about how to make tax digital with Oliver Fisher from HMRC. #AATConference #MTD #hmrc

.@HMRCgovuk's Oliver Fisher urges accountants to 'strike early and get the support' when registering clients for the MTD pilots #AATconference pic.twitter.com/YgsrOaUiSS

Cooley and the Gang

Sam Ellis delivering the first talk of its kind at the #AATconference – The integrated and analytical accountant pic.twitter.com/aWhaaSfr50

Really good sessions and lovely to meet some new software suppliers. Very helpful guys from the @Xero stand, great to talk to and new things to help my business!#AATConference #newskills

#AATConference big data … big numbers of the volume of data … blimey I had no idea !! Love learning something new

Well, that’s day 1 of #aatconference done – what an excellent day! Now off out for a walk, ahead of tonight’s gala dinner and awards ceremony ?

As Henry said, delegates now got a well-earned rest (or walk!), before the glitz and glamour of the evening gala dinner! Selfies appeared to be the order of the day…

The second AAT Professional Member Awards proved the highlight of the evening. Seven awards were handed out, including AAT Champion, Rising Star and Branch of the Year. 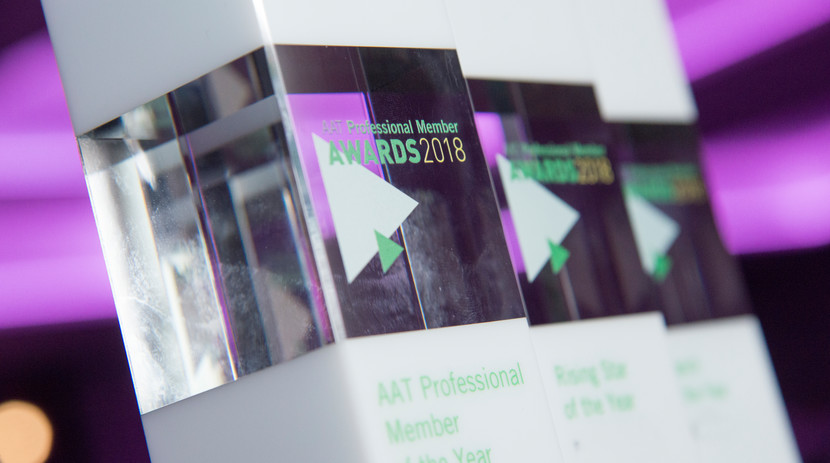 For going above and beyond, AAT Champion of the year goes to Angela Demoore! Amazing work, well done and thank you. #AATawards2018 #AATConference pic.twitter.com/OLXvhkEkON

The late night and overcast weather didn’t dampen the enthusiasm for learning as we moved into day two. While Oliver Fisher and Brian Palmer took part in an HMRC Q&A session, Henry Cooper tried something less sedate by hosting around 25 members on a ‘net-walk’ around the hotel grounds.

Thank you to everyone who turned up for the “netwalking” walk, around the grounds on day 2 of the #aatconference pic.twitter.com/UKoO8BdZ7P

Breakfast has been eaten and almost ready for the day and lots more learning. (Husband has been appointed “official” photographer this morning). #aatconference pic.twitter.com/zbs0GOpYC0

The first set of workshops for the second day of the Conference saw the return of Michael Steed’s popular tax updates, Lucy from the National Cyber Security Centre discussing minimising the cyber risk, Nomisma providing insights on how to run a 21st century practice and Andi Lonnen saying how to control your personal impact at work.

Changing the world – one accountant at a time

Steve Pipe was up next delivering the second keynote speech of the Conference. As ever, he was engaging and enlightening, talking on the theme of becoming one of the most inspiring and profitable accountants.

#AATConference – keynote session – how to become one of the worlds most inspiring and profitable accounts plus a FREE book !! Thank you

Massive love for the #AAT members! Second day of the #AATconference and the amount of love we have got is crazy! Thanks guys! #Xero #madlove pic.twitter.com/1m0hkSuIBE

The penultimate round of workshops saw Richard Simms, along with AAT’s Adam Williamson, provide an update on money laundering regulations, while Xero’s Glenn Foster discussed frictionless finance and Chris Paton delivered a talk on building a clear business strategy. Michael Steed conducted a second round of his tax update.

After another outstanding lunch came the last round of workshops – from Deborah Ashby on Excel, an update from Stephen Rowntree of The Pensions Regulator, and Sam Ellis discussing how data analytics can inform decision making.

We have our competition winner! ? Michelle Wright from Ellison Services has won the Makar gin – Michelle, come to stand 11 to pick it up! ?#AATConference @YourAAT pic.twitter.com/dapM1zto1R

With a final opportunity to visit our wonderful exhibitors completed, delegates enjoyed an interesting and engaging panel debate around the future of accountancy. Hosted by Brian Palmer, the panel included 2017 AAT award winner Abul Nurujjaman, Andi Lonnen and Glen Foster.

#aatconference – The final session of the day – “The Future of Accountancy” panel discussion. pic.twitter.com/C32OgetoTk

So long for now

Outgoing AAT President Nicky Fisher then closed what has been a spectacular two day affair. We hope all of our delegates had a great time and encourage you all to give feedback via cpd.events@aat.org.uk. See you all in 2019!!

Do you attend conferences for your business? Have you been to one you would recommend? I've just returned home from the AAT conference. You can read my thoughts and experiences of the event and why you should attend business industry events on my blog. https://wp.me/p8QySe-46 #aatconference #aatawards #continuingprofessionaldevelopment #cpd #accountancy #bookkeeping #attendingevents #attendingconferences #lifeofabookkeeper #numberstuffblog