AAT is urging accountants to acquaint themselves with the warning signs associated with money laundering – and seek formal training if they haven’t already done so.

As part of Flag It Up, the Government’s anti-money laundering (AML) campaign – which this month is focusing on the need to act with suspicious minds, a new poll by Coleman Parkes Research issued today has shown that over one in three (36%) accountants have not received any formal AML training. In addition, only 37 per cent of accountants have a Money Laundering Reporting Officer (MLRO) in their company – compared to 70 per cent of lawyers surveyed.

How AML affects the UK

Money laundering is big business. The National Crime Agency estimates that money laundering helps enable serious and organised crime that costs the UK an estimated £37 billion each year. This rises to hundreds of billions of pounds when considering international criminal money being annually laundered through UK banks and their subsidiaries. The signs of money-laundering aren’t always obvious, but the impact is wide-ranging.

There are major concerns about the vast number of accountants who failed to recognise the key ‘red flags’ that should trigger suspicion into client activity;

Money laundered by criminals can put people out of work, and in some cases into poverty; help cause cyber attacks; and even fund terrorism. Thousands of employees working in the accounting, legal and property sectors – among others – are at daily risk of being targeted by these criminals who use professionals in order to disguise money being laundered through the financial system.

Most accountants should be well aware of the threat that money laundering possesses however, Adam Williamson, Head of Professional Standards, AAT said:

“The evidence suggests that not nearly enough are reporting suspicious activity. Just under 8,500 Suspicious Activity Reports (SARs) were submitted across the accountancy, legal and property sector during 2017-18.

“Even if you have received formal training in the past, why not take the opportunity to familiarise yourself with the latest red flags that could indicate potential criminal activity? There’s no excuse to fail to recognise the threat, and it could help save lives.”

More generally there appears to be a lack of awareness of how best to tackle the issue. For example, a new YouGov poll commissioned by AAT has revealed that in relation to the Office for Professional Body Anti-Money Laundering Supervision (OPBAS), set up a year ago to provider consistency across the 22 money laundering professional body supervisors, 54% of MPs say they have “never heard of this organisation”. 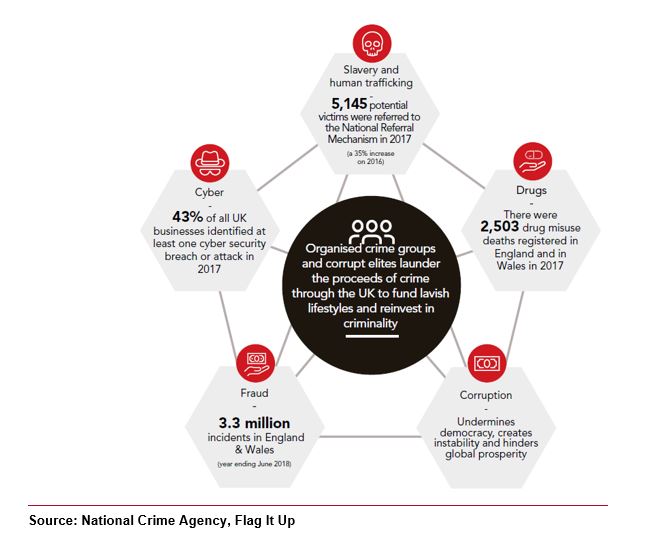 Thinking with a suspicious mind

The Flag It Up Campaign urges professionals in accountancy, legal and property to think with a ‘suspicious mind’ and report a SAR that could prove crucial in preventing this range of serious crimes. While the information you include in your SAR may not seem definitive in your eyes, or meet what you might think is the level of legally valid evidence, it can contain the final piece that completes the investigative jigsaw for law enforcement agencies.

AAT has 130000 members operating in accountancy and bookkeeping, and we recognise the responsibilities each and every member has to get this right. As we head into the new tax year, it’s been announced that the Government’s new Serious and Organised Crime Strategy will be given at least £48 million to tackle illicit finance – but ultimately the scheme will only be successful if accountants highlight when clients are overtly evasive, if funding sources are unusual or if there are discrepancies in client transactions.

It’s not a hard or particularly time-consuming job to raise a SAR, but it is an accountant’s professional and legal duty to do so. Failure to report doesn’t just impact on wider society

accountants who do not comply could face up to two years in prison, be excluded from the profession, and/or face an unlimited fine.

AAT is recognised as a statutory supervisor for supervising the compliance of AAT licensed members, as detailed in schedule 3 of the Money Laundering Regulations 2017.

AAT has a responsibility to:

In return, AAT licensed members must register for Anti Money Laundering supervision and put in place control systems to assess the risk of their firm being used by criminals to launder money.

For additional information about the ‘Flag It Up’ campaign, or more advice on how to tackle money laundering, please visit FlagItUp.campaign.gov.uk