The brief summer hiatus in the uncertain post-Brexit world of politics has come to an abrupt halt over the past couple of weeks as the party conference season has taken centre stage.

The UKIP and Liberal Democrat conferences – aside from the largely unknown Diane James having to fill the somewhat hefty shoes of Nigel Farage following her appointment as UKIP leader – went largely unnoticed. But the wider Labour Party’s decision to stick with Jeremy Corbyn as leader has certainly attracted plenty of attention. Will Labour MPs concede that Corbyn is here to stay and deserves their support, particularly ahead of boundary changes in 2020 putting a whole number of their seats at risk? Or will a second revolt emerge?

Earlier this month I was lucky enough to be invited to a fascinating debate hosted by Opinium Research and the Social Market Foundation. Entitled ‘Dead Centre’, it brought senior MPs from the three largest political parties in England and Wales together, with former education secretary Nicky Morgan representing the Conservatives, anti-Corbyn fan Chuka Umunna holding the Labour fort, and former deputy Prime Minister Nick Clegg from the Liberal Democrats.

The debate agreed that the Conservatives firmly hold the crucial centre ground of British politics, once held so fervently by Tony Blair’s Labour, and discussed whether, given the SNP’s rise coming largely to Labour’s disadvantage and those boundary changes set to cause further heartache for Corbyn’s party, it would truly be possible in the medium term for anyone to successfully dislodge the Tories from power.

According to their research findings, Opinium said that 45% of voters put themselves in the ‘centre ground’ politically, as opposed to 25% on the left and 30% on the right. However, 39% of over-65s put themselves to the right of centre, compared to just 27% of those aged 18-34. In addition, the survey showed strong support for traditionally ‘right-wing’ policies including allowing new grammar schools to be built and reducing immigration levels – but also for traditionally ‘left-wing’ policies such as banning zero hours contracts and introducing a mansion tax. 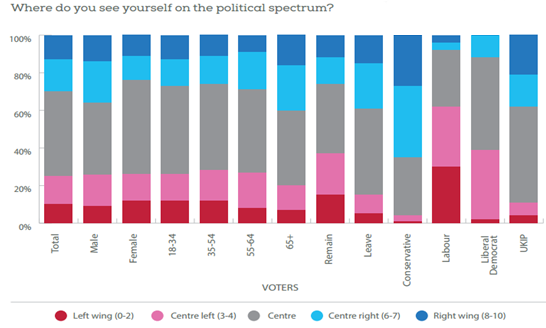 In total, according to the report, around 50% of the population favoured traditionally right wing views, offering a solid ground for the political parties to reach out to in this area. However, with everyone still scratching their heads as to what exactly Brexit is going to look like, and the grammar schools idea proving controversial for some, the Conservatives may do well to keep hold of all of those identifying as central or central-right – although they are helped by the research showing that new Prime Minister Theresa May and new Chancellor Philip Hammond are seen as slightly more ‘left’ than David Cameron and George Osborne. Interestingly, 7% of voters said they saw Nigel Farage as left-wing.

Despite May’s insistence that the next General Election will not be until 2020, other political parties are still readying themselves for a potential snap election, where the loyalties of the centre ground will again be put to the test. Prior to that however, one of the first major milestones for the new-look Government will be Philip Hammond’s first Autumn Statement on November 23. YourAAT will be live-tweeting that event, so keep an eye on our feeds for announcements and commentary as the Chancellor delivers his statement.